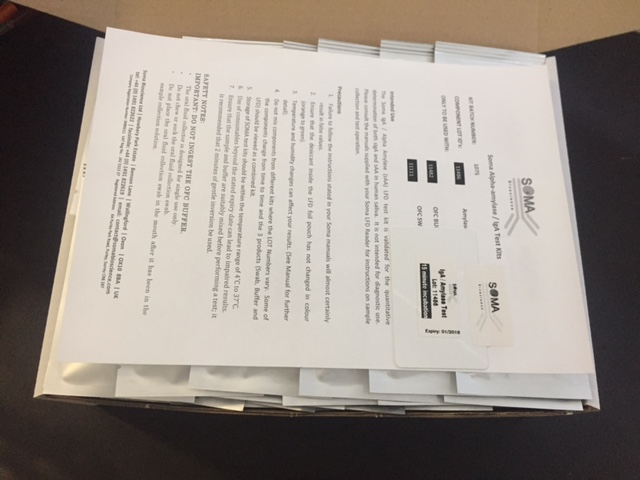 Soma has developed 3 Point of Care Tests to monitor Immune Function.  You can even have 2 tests on the same LFD:

Secretory IgA is a protein, more specifically an antibody which is the first line of defence on the mucosal surfaces against upper respiratory tract and GI tract infection. It is sometimes used as a surrogate marker of the general immune system, although it should be remembered that the immune system is multi-faceted and somewhat complex in nature.

Research in athletes has shown that if sIgA levels drop significantly from an individual’s baseline norm then they have a one in two chance of an infection in the following two to three weeks (Neville et al., 2008; Dunbar et al., 2013). This is a hard-hitting fact.

Outside of sport, the use of a simple immune marker can be used to deal with growing problems of absenteeism from and presenteeism at work. The latter is where people go to work in ill-health and productivity is low not just on those days, but for many days after as a result. In the military, rapid insight into an individual’s immune status can be advantageous in assessing response to various exercises or combat, as well as examining risk of future illness.

Salivary IgG is another antibody, which is not usually secreted in salivary glands, but diffuses from the blood. In fact IgG is the main immunoglobulin in human blood. However you can measure the concentration in saliva using the Soma IgG LFD test. It is not commonly used as an isolated marker, but has been assessed in ratio form with sIgA (Dunbar et al., 2013) and improved the monitoring of illness as opposed to using just IgA alone. Along with IgM this is the other key immunoglobulin found in saliva, but in contrast to sIgA has been investigated in very few research studies. One study has found that salivary IgG levels remain unchanged during acute exercise in both athletic and healthy participants.

Salivary Alpha-amylase (sAA) is another antimicrobial protein in saliva. It is more commonly known as a key digestive enzyme responsible for breaking down starches in the mouth and gut. However, its role in protection against disease is its ability to inhibit growth and adherence of bacteria to epithelial surfaces.

sAA has appeared increasingly in the literature as an acute stress biomarker, reflecting sympathetic nervous system activity and differs from cortisol which is slower to respond being a function of HPA-activity. Thus the analyte has been used frequently as a rapid acting acute stress marker in the behavioural sciences. Like cortisol, it is very much viewed as a biomarker reflecting the stress response to exertion, yet some argue that sAA is a more sensitive marker, partly because it is quicker to spike after stressful activity, than the more slowly acting cortisol.